The Triumph Street Scrambler tries to find a sweet spot between a retro-themed motorcycle and a potent off-roader.

When it comes to retro motorcycling, the Triumph Bonneville range is one of the first names that come to mind. The catch is that if you end up buying a retro motorcycle, the chances it of being a capable off-roader are less and if you want to increase its capability then you usually end up spending a more on the motorcycle.

Now, Triumph is planning to fill that gap with the Street Scrambler which has been launched at a price tag of Rs 8.1 lakh (ex-showroom, Pan India). We took the motorcycle for a short spin to see how it feels to ride and whether it’s worth spending the money on.


Let’s start with the first thing that you will notice about the Triumph Street Scrambler – the looks. The biggest attraction of the latest Triumph is the high mounted exhaust which looks absolutely gorgeous. It’s positioning raises some concerns though, like whether it’ll be too close for comfort during the regular city traffic. But once astride on the bike – even for the short time we had with the bike – the heat shield did its job well and didn’t give a chance to complain. 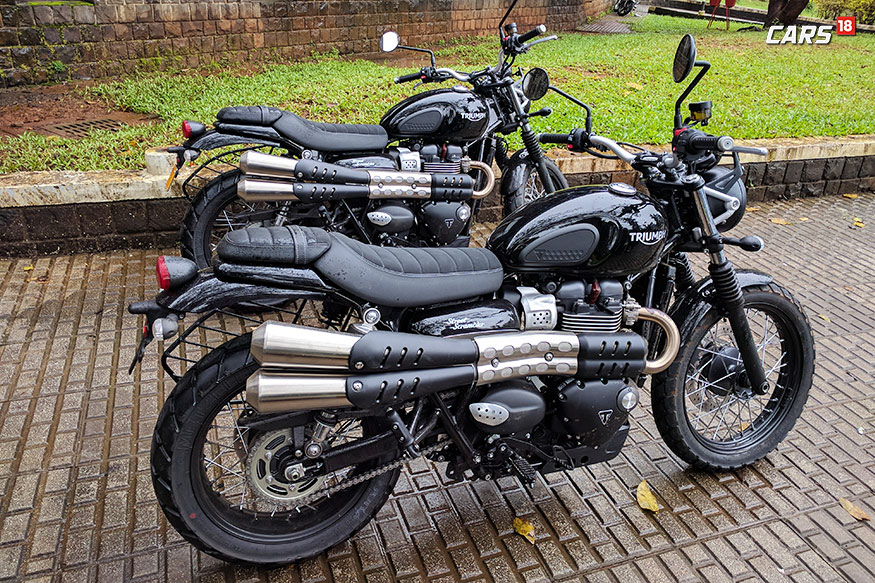 Once you get your eyes off of those pretty-looking exhausts, you will notice that the Street Scrambler manages to stick true to the classic Bonneville styling thanks to the classic round shaped headlamp, the minimal body panels and the fuel tank shape. But given that it gets a few changes under its belt in order to have some off-road capabilities, the stance of the motorcycle has changed quite a bit.

It now comes with a huge 19-inch wheel up front, a 17-inch wheel at the back and the suspension travel both front and back has been increased too as compared to the Street Twin – the model on which the Scrambler is based on. This also helps in increasing the ground clearance of the motorcycle which will come in handy while tackling the rougher terrains. It also gets Metzeler Tourance tyres that provide ample grip and confidence in both dry and wet tarmac and should be able to suffice for soft off-roading. There’s also an underbelly protection to safeguard the motorcycle in such scenarios. 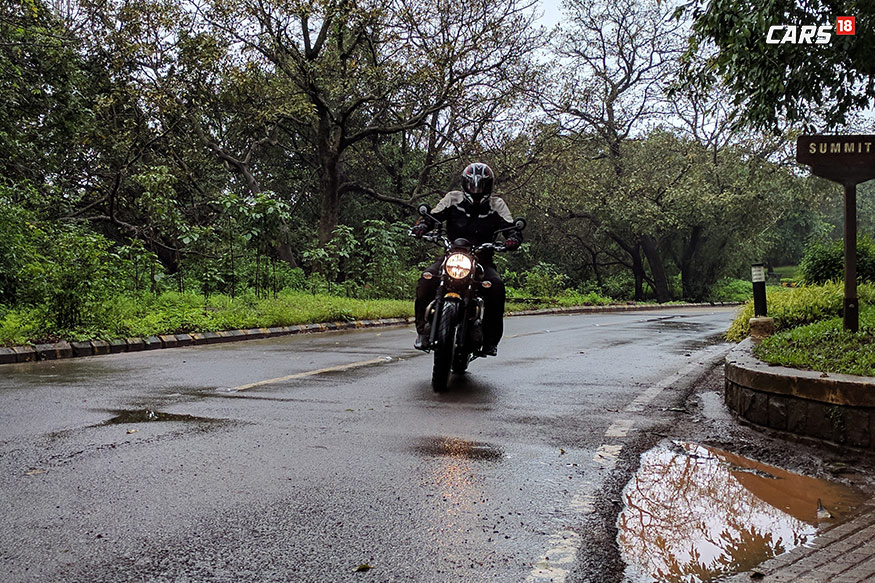 While all of this makes the Street Scrambler much more capable off-road than any other Bonneville, the downside is that the motorcycle’s seat height has increased and it has also gained 8 kilos in weight (dry). But while riding the motorcycle, you won’t notice the weight that much unless you go for straight line speed runs because the power output stays the same as the Street Twin – 55 HP.

This brings us to the heart of the machine which in this case is the tried and tested 900cc liquid cooled parallel twin unit which also powers the Street Twin and the Bonneville T100. What’s different in this one is that the engine has been retuned for max torque delivery lower down the rev range, which is 80 Nm delivered as low as 2850 RPM. The gearbox remains the same 5-speed unit as seen on its Bonneville siblings. 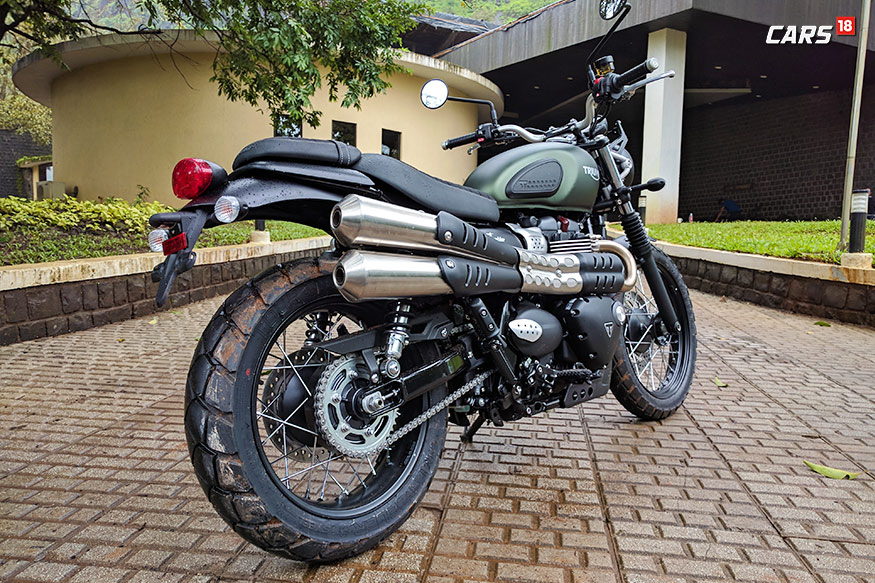 There’s some clever engineering on offer as well in the form of the interchangeable pillion seat which gives way to an aluminium rack, removable pillion pegs, an under seat USB storage and thankfully, both the ABS and traction control are switchable in order to give more control over the bike. 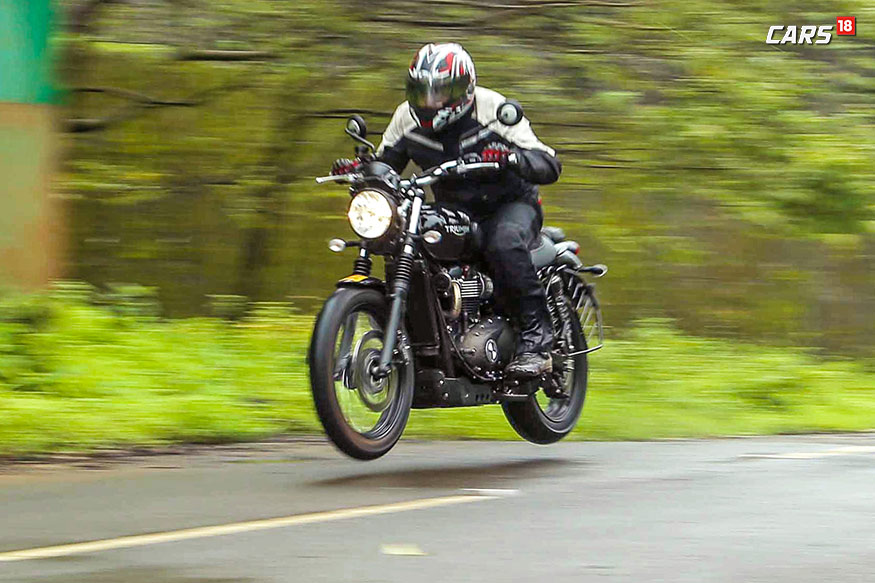 As far as the riding position is concerned, Triumph has fitted the Scrambler with taller and wider handlebars along with bear trap styled footpegs which are more front set than before allowing the rider to ride the motorcycle comfortably even while standing on the pegs. The suspension setup also makes the ride quality feel planted and confidence inspiring. Braking duties are done by Nissins at the front which offers fantastic feedback and good bite as well. Overall, the motorcycle feels connected to the rider and responds as per the rider input while giving good feedback as well.

And of course, being a part of the Bonneville family, it gets lots of customising options as well with a choice of over 150 accessories.

So at the end of the day, the Triumph Street Scrambler makes sense for those who want to have a retro-themed motorcycle but don’t want to be restrained to just perfectly laid out tarmac. The Street Scrambler delivers on that while sticking to its Bonneville roots. We will be coming out with a more detailed review once we have the motorcycle in our garage for a longer period of time. Watch this space for updates.